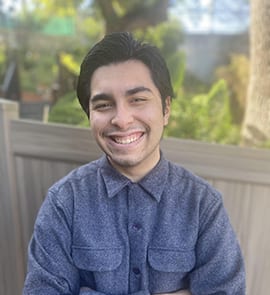 Teotl Veliz is a Latino / Indigenous documentarian, writer, producer, and emerging director from the South Bay of California. Veliz has been a dedicated student of his family’s and local community’s rich storytelling culture from a young age. In his senior year of high school, he won the California State Championship for the National History Day Competition (along with his partner Indya Searchwell), representing California nationally in the category of Historical Documentary. His submission: The Tragedy of Terminal Island, has won three awards and was an official selection for the San Pedro International Film Festival. During this time, Veliz hosted a radio show on 101.5 FM based out of Boyle Heights East Los Angeles, focusing on issues in the immediate Chicano community interviewing guests such as the widely acclaimed author Luis J. Rodriguez. Currently, Veliz is writing and producing a Western comedy anthology series focusing on Native American and Latinos’ experiences.

During his summer before college, Veliz was accepted into the Film2Future GrAD School Program, where he produced, art directed, and cast an award-winning spot for HULU on the importance of Mental Health in the Latino community, making him one of Hulu’s youngest producers! Through Film2Future, he recently landed a paid internship at the prestigious management/production company Writ Large and has been working with executives, writing script coverage, and learning the representation business’s ins and outs. Teotl’s in-depth experience with Film2Future as a student and intern, along with his passion for storytelling, makes him an ideal fit for his new role as Student Ambassador for Film2Future! In this role, he assists with community outreach by providing the student’s perspective to the program and inspiring future filmmakers.

“Film2Future gives filmmakers of color the tools they need to survive and thrive in the film industry. In an industry that has traditionally excluded us from telling stories, the door is opening, and audiences are begging to hear our stories. Film2Future is doing the groundwork in creating a more diverse Hollywood, and I couldn’t be more proud to be apart of it.”