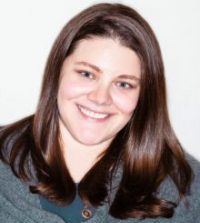 Laura Terry is a lapsed television producer who grew up in Connecticut mainlining The WB and currently fills her days developing scripted content for The CW (2016 – as of this bio). In other words, she really likes her job. She was integral to the inception and creative direction of NANCY DREW, BATWOMAN, ALL AMERICAN, ROSWELL, NEW MEXICO, IN THE DARK, & BLACK LIGHTNING, among other pilots, as well as next year’s hot new show.

Before coming to The CW, she was a VP at production company Full Fathom Five where she developed pilots and produced series for Hulu, Amazon, HBO, Showtime, FX, Syfy, USA, E!, Lifetime, Freeform, NBC, CBS, Fox & The CW. Prior to that, she was a creative executive at Salma Hayek’s Ventanarosa Productions. Prior to that, she was an overperforming, undervalued assistant, and…actually, she doesn’t want to talk about that.

She is intimidated by Twitter, is an accomplished online shopper, and proudly cries at work. She also doesn’t take bios very seriously, a decision she sometimes regrets.