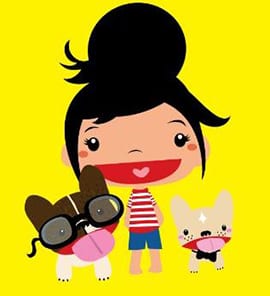 Karen Chau is currently the Director of Development at Disney Branded Television. She’s been working at Disney for what seems like forever. She is the creator of the Emmy nominated children’s television series Ni Hao, Kai-Lan on Nickelodeon. Ni Hao, Kai-Lan was based on the childhood memories of her growing up in a bicultural Chinese-American household. Kai-lan is her real name, and “Ni Hao” means “Hello” in Mandarin. Karen wanted Kai-Lan to be a true hybrid celebrating both Chinese and American cultures and wanted to see an Asian-American female protagonist to exist in the animated preschool space. Karen graduated with a degree in Studio Art from the University of California, Irvine. (She made giant shoes and hung them on the streets of Irvine.) She is also an artist who likes to doodle and makes things that make you laugh.