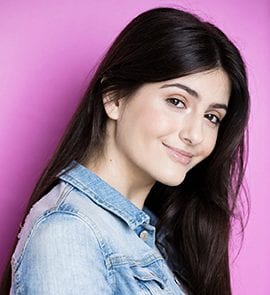 Joel is a Lebanese actress, writer, and director. Since she was a little girl, movies and TV shows have been a whole other world she could visit, and her passion for cinema and drama only grew stronger as she got older. In high school, Joel joined a theater class playing the lead in multiple plays and received an honorable mention in two Drama Teachers Association of Southern California competitions. In addition, she wrote, directed, produced, and acted in short films and skits.

Joel got accepted into Film2Future, where she pitched, wrote, and directed Rasha, a short film based on origin stories, which later received the 2021 Best Directing Award. Through Film2Future, she landed an internship with Small Dog Picture Company, writing script, book, and podcast coverage, and learned more about the business of pre-production. Joel is fluent in Arabic and, because of this, recently landed a position as a post-production Subtitles Translator for the documentary Sirens directed by Rita Baghdadi.

"Film2Future is one of the best organizations I have discovered. They provide mentorship to student filmmakers like me who thought they might not have a way into the industry. They teach us and give us the necessary tools to get started. Film2Future has gone so far as to help me get my first paid internship as soon as I completed the program."