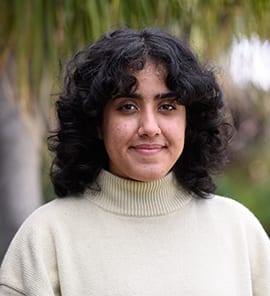 Iyeh Malekpour is a first-generation Iranian-American living in San Fernando Valley. Following the lead of her two older brothers, she joined the Film2Future Emerging Technologies program after her freshman year of high school, the summer of 2018, where she had a chance to produce for the first time. It was in that summer that she produced the virtual reality short “American Dream” (2018). In the following years, Iyeh returned to the F2F grAD school program where she produced and was the art director for the Hulu ad #RealTalk for Mental Health Awareness Day. Alongside that, she mentored students in the 2020 Narrative Filmmaking program; ultimately leading to her joining the F2F team as a team captain for the 2021 Animation Program.

Currently studying film at California State University Northridge, Iyeh hopes to pursue producing and management in the future. Through Film2Future, she landed an internship with the management/production company, Writ Large Inc. where she read and completed coverage on novels and scripts written in addition to formulating client grids, actors lists, but most importantly to her, learning the representation business’s ins and outs. Outside of school, she continues to pursue various endeavors within film to fully experience what the industry has to offer.