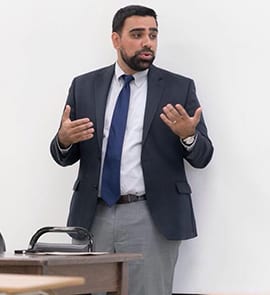 Haroon Azar is a Partner at The Rosslyn Group, where he manages the firm’s national security practice. Haroon is also a Senior Fellow at the UCLA Burkle Center for International Relations, where he focuses on research and programming at the intersection of security and religious freedom. Prior to his current roles, Haroon was the Regional Director in Los Angeles for the U.S. Department of Homeland Security and previously, Deputy Director for the Middle East, Africa, and South Asia at DHS headquarters in Washington DC. Haroon also teaches courses on National Security and Civil Liberties at UC Irvine School of law.

“Being born and raised in South Los Angeles, Film2Future’s mission to offer an unprecedented filmmaking program to under-served teenagers in LA is very personal. As an inner-city kid, you usually don’t see positive representation in media and film let alone an opportunity to mold it. FTF does both amazingly!” —Haroon Azar