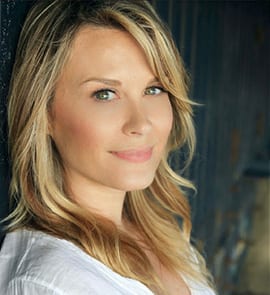 Bonnie Somerville is an American actress who grew up in Brooklyn, New York and began performing in school productions at a young age. She attended Boston College as a theatre major and went on to study at the Lee Strassberg Theatre Institute in New York City. Somerville’s first major acting role was starring as a 1950’s rocker in the miniseries “Shake, Rattle and Roll,” which aired on CBS in 1999.

Today Bonnie has many notable film and TV credits under her belt. Bonnie was a series regular for the first two seasons on the hit CBS series “Code Black,” played the female lead on the CBS series “Golden Boy” in 2013, and most recently returned to CBS in a recurring role on the hit series “Blue Bloods.”

Bonnie has had starring and supporting roles in many major films, including the Warner Bros musical drama “A Star is Born” opposite Bradley Cooper and Lady Gaga, “Spider-Man 2,” “The Prince,” “Without a Paddle,” “Bedazzled,” “Shades of Ray,” “The Ugly Truth” and “Labor Pains.” She played one of the leads in the 2010 indie comedy “The Best and the Brightest,” alongside Neil Patrick Harris and Amy Sedaris, and also had a starring role in in 2012 thriller “Fire with Fire,” opposite Bruce Willis, Josh Duhamel, and Rosario Dawson.

Bonnie has frequently collaborated with legendary producer Darren Star, including starring roles in his television series “Cashmere Mafia” opposite Lucy Liu, “Kitchen Confidential” with Bradley Cooper, and “Grosse Pointe” in the early 2000s. Bonnie was also cast as one of the leads on the NBC series “In-Laws” in 2002 and a featured regular on the ABC series “NYPD Blue” for its last season. Audiences will likely also remember her as Ross’s girlfriend ‘Mona’ on “Friends” and for her recurring role as ‘Rachel Hoffman’ on the first season of CW’s “The O.C.”

Not limited to just acting, Bonnie was “discovered” singing in a nightclub in New York City at the age of 18 and signed a development deal with Interscope records as a singer/ songwriter. She continues to perform in Los Angeles, and wrote and performed the original song “Winding Road” on the Garden State Soundtrack, which won the Grammy for Best Soundtrack of The Year in 2005. Her EP is available on iTunes and Spotify.

Bonnie is currently hosting and producing her Podcast, titled Second Act, where she interviews guests from every walk of life, who have experienced endings, loss, and upheaval that have forced them to find themselves again and again. The podcast, which will explore the growth and courage these life-altering changes take, and how we can overcome fears and begin again, will be coming soon to Spotify and Apple Podcasts.