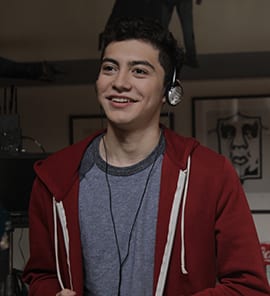 Andrew Oropeza is a Latino composer and sound designer from South Central Los Angeles. He joined the Film2Future Live Action Narrative program in the summer of 2016, where he edited and composed music for his first short, “What Runs Through Blood” (2016). In the years that followed, Andrew returned to F2F for the Animation and GrAD programs. In 2019, he wrote, directed, and composed for the Hulu ad “#RealTalk” for Mental Health Awareness Day. Through Film2Future, he became an intern at 3Arts Entertainment in the fall of 2019. His F2F journey has led him to join the team as the coordinator for the 2021 Animation Program.

Andrew is also a proud Trojan at the University of Southern California, majoring in Narrative Studies with a minor in Game Audio. He is a member of the Trojan Marching Band and serves as the co-executive director of Troy Camp. Outside of school, he continues to compose for short films, documentaries, and video games.